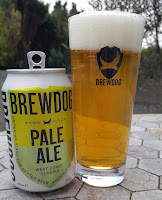 Today it’s one of my occasional glances at some of
the many BrewDog beers coming and going on the local market at the
moment. There’s no particular pattern to the selection.

Pale Ale is first. Wot no adolescent garage band name? This
is a recent addition to their core range, sorry, “Headliners”,
replacing the rightfully much-derided Indie from a couple of years
back. This, too, is 4.2% ABV but it brings a proper hop game, with
Chinook, Citra and Simcoe. It’s a reasonably clear pale amber and
has a decent level of thickness on the palate; not watery and with
just enough fizz to propel the hop fun. The aroma is lightly
spritzy; inviting without being loud, while the flavour neatly
combines cloudy lemonade and grapefruit juice with a danker funky
side, but also some juicy mango and peach. It’s complex enough to
keep this beer nerd interested, while also easy-going, unfussy and
well suited to by-the-pint drinking. Not very rock ‘n’ roll, but
solidly decent. 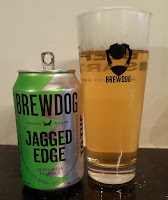 I didn’t know what to expect from Jagged
Edge“spiky India Pale Ale” but the name and description
intrigued me. It’s 5.1% ABV and in the glass
it’s almost clear, hazed up a little with floaty bits. The
aroma is mild but pleasantly tropical, in a non-committal way. It
commits on tasting but I’m not entirely sure what to. The tropical
fruit is there to an extent, in contravention of the can’s “to the
bitter end” promise. Rather than bitter it’s dry — the intense
tannins of over-stewed and undrinkable tea. Then there’s kind of a
sulphurous rubbery twang on the end: too much boing to be spiky.
Whatever new vista of beer flavour they were trying to unlock with
this one, it hasn’t quite worked. It’s all just a bit busy, with
the soft fruity hops and the hard acidic ones pulling in opposite
directions. You’d be better off with Punk. 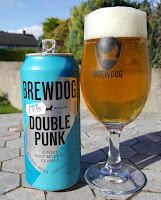 Speaking of which, the latest brand extension of
the brewery’s flagship is Double Punk. Kind of amazing it’s
taken this long. 8.2% ABV is pretty standard for one of these, and
I’m deliberately not going to go comparing it to Punk even though
it has the same hops or whatever. Appearance-wise it looks
identical to Jagged Edge, floaty bits and all. The aroma is pure
American grapefruit: what I would regard as the epitome of classic
west-coast hopping. It carries that through to the flavour,
presenting dry and acidic on the tongue, with just a buzz of dank
resins in the background to offer some complexity. I enjoyed how
straightforward it was: big hops, no messing.  It’s very clean for
the strength too, and although it’s quite weighty and built for
sipping, it’s not hot. The only thing that really slows you down is
the bitterness. And if you can’t handle that then you shouldn’t
have chosen a double IPA.

I do like a sour IPA so wasn’t going to pass on
Fake Empire, badged as a hazy version of same. It’s not too
cloudy; translucent rather than opaque. The aroma is juicy satsuma,
with a hint of tartness, but no more than you’d expect from an
actual citrus fruit. The flavour is clean and, yes, juicy again.
Technically it’s sour, I suppose, but very gently so. If the
intention was simply to accentuate the hop-fruit effect, then that
worked. There’s a pinch of lemon zest with the orange, but it’s
still only a light bitterness. Overall, this is balanced,
accessible and very drinkable, if unnecessarily strong at 6.2% ABV.
While I enjoyed it, I prefer sour IPAs to have more of a bite than
was on offer here. Juice fiends will lap it up, however. 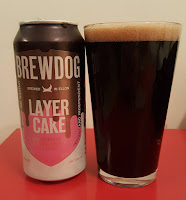 A big stout to finish: Layer Cake. This is
7% ABV and sports a huge sticky pink marshmallow flavour, with a
soft texture to match. Chocolate brownie, cocoa nibs and vanilla
are also promised but there’s really not much chocolate in here,
and zero stout for that matter. I searched for nuance: some roast,
a little coffee? No, just the vanilla beans, adding a different
kind of sweetness. This is a pure gimmicky novelty and barely a
beer. Thankfully it’s not very thick, which goes some way to keep
the cloying side in check, but it’s still not easy going. A full
can would be a big ask. I’m OK with silly dessert beers when
they’re fun, but this wasn’t even that. Hard pass.

What have we learned? BrewDog is still out there even if they’re
not in the beer headlines every day. And they still brew some very
decent beers, alongside a spirit of experimentation that doesn’t
always hit the mark.