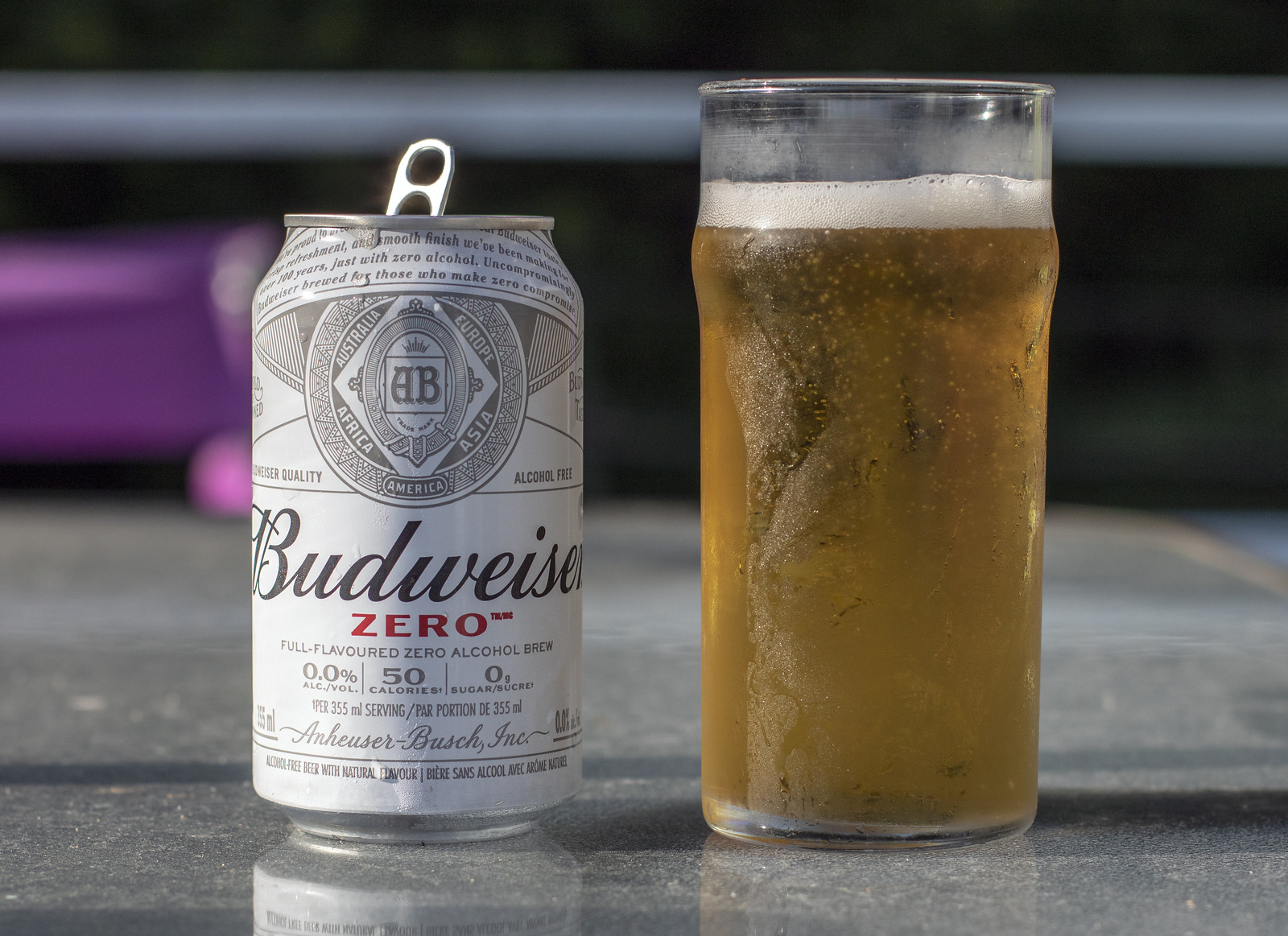 Back in June 2016 I wrote my most important review
I’ve ever done, a review of Labatt’s non-alcoholicBudweiser
Prohibition Brew. I wrote about non-alcoholic beer before
then but Budweiser Prohibition was different, it actually was
reminiscent of the real deal. I’m not a fan of Labatt/AB-InBev’s
offerings but something about Prohibition popped out at me. Fast
forward to July 2020, I was looking on the Manitoba Liquor Mart website a week
ago and came across Budweiser Zero with a “coming soon!” tag
next to each of their SKUs. I searched for Prohibition and the
product was delisted on the website. I recall going to a local
Safeway a couple weeks back and seeing a large display for
Prohibition with a price tag of $9.99 for a 12-pack of the beer, I
didn’t think anything of it.

Budweiser Zero is the newest non-alcoholic product by Labatt
(AB-InBev), replacing Prohibition. I can’t seem to find any reviews
of Bud Zero yet but from I found that they created a recipe with
zero sugar and lower calories than Prohibition. My closest Liquor
Mart still has a couple cans of Prohibition left so I picked one up
to compare with this beer at the end. Bud Zero is rated at 0.0%
ABV
Budweiser Zero Nutrition Facts (per 355mL can):
50 calories
Fat: 0g
Carbohydrates: 12g
Sugars: 0g
Protein: 0g
Sodium: 10mg (1%)
Potassium: 50mg (1%)
Calcium: 10mg (1%)
Ingredients: De-alcoholized beer, Natural flavour. Contains
barley
Appearance: Pours a crisp light straw yellow body,
pretty much what you would expect from a lager from Labatt. The
beer has a lot of carbonation in the body, while the head is pretty
thick and frothy with a snow white hue to it.
Aroma: I guess it smells reminiscent of Bud Light. It’s
a bit sweet with a mild grain presence to it, a hint of corn and a
grassy hop finish. It’s light and a bit metallic, pretty standard
lager so far. There’s a bit of a weird icing sugar aroma that pops
up once in a while, not something I think I’ve ever smelled in a
beer before.
Taste: This is the second time I’ve tried this beer
since last night and last night I drank it straight out of the can
and it tasted like metallic water. This time around I poured it in
a glass and it tastes a bit like Bud Light but it has a bit of a
taste that reminds me a bit of a grain or ingredient that they
wouldn’t typically put in the beer.. a bit of a buckwheat-like
bitterness in the grain. Zero is a bit sweet with a bit of a
toasted rice taste that reminds me a bit of of Rice Krispies
cereal. There’s a hint of lemon popping out which I don’t mind, but
overall the beer is quite light but it’s no surprise at 0.0% ABV.
No real noticeable aftertaste except maybe a bit of rice. Very easy
to drink, even as a vocal beer snob.
Overall Thoughts: It’s definitely drinkable and if
you’re a fan of Bud Light, you will probably enjoy this. It’s quite
light in taste and smooth, so easy to drink on a hot summer
afternoon, but perhaps too light for many people? My local Safeway
charges $10.99 CDN (approx $8.20 USD) per 355mL (12oz) six-pack, so
it’s not cheap when Bud Light is available at the liquor store for
only a dollar or two more in my neck of the woods. Non-alcoholic
beer has come a long way since the days of O’Doul’s, and this one
tastes the closest to the real deal I’ve had yet, even more so than
Coors Edge, though I’m not a fan of Bud/Bud Light products to begin
with. Do I recommend this? If you’re dieting and still crave a bit
of a barley beverage, or if you are wanting to cut down on the
consumption of alcohol, for sure. Products like Prohibition/Zero
are creating a segment in the beer industry that has been ignored
and I’m intrigued to see what the competitors come out with in
coming months and years.
Availability: It appears that this is going to be a
global offering so I’d say expect this beer in countries where
Budweiser and Bud Light are easy to find. In Canada, expect to see
this at liquor/beer stores as well as at major grocery
chains.
Compared to Prohibition: Prohibition has been tweaked a
bit since I first reviewed the beer back in 2016, a 473mL can
originally had 200 calories compared to 160 when the brand was
discontinued, so even if this was in a 355mL can, it would still
have a lot more calories than Zero.  Prohibition contains
de-alcoholized beer, malt extract, hop extract and natural flavour,
while Zero contains simply de-alcoholized beer and natural flavour.
Prohibition’s aroma is a lot stronger with a very strong barley and
corn aroma to it, which I actually kind of prefer, but many will
like Zero’s lighter aroma instead. Prohibition is also surprisingly
quite a bit more aggressive in taste with it having a strong taste
that’s a combination of barley water and apple juice. The apple
juice taste is off putting for me so Zero is better there.
Appearance-wise, almost completely identical but Zero has a bit
more carbonation than Prohibition. It’s a bit of a toss-up for me,
I want a bit more aroma in my beer so Prohibition wins there for
me, but for taste.. Zero for sure. 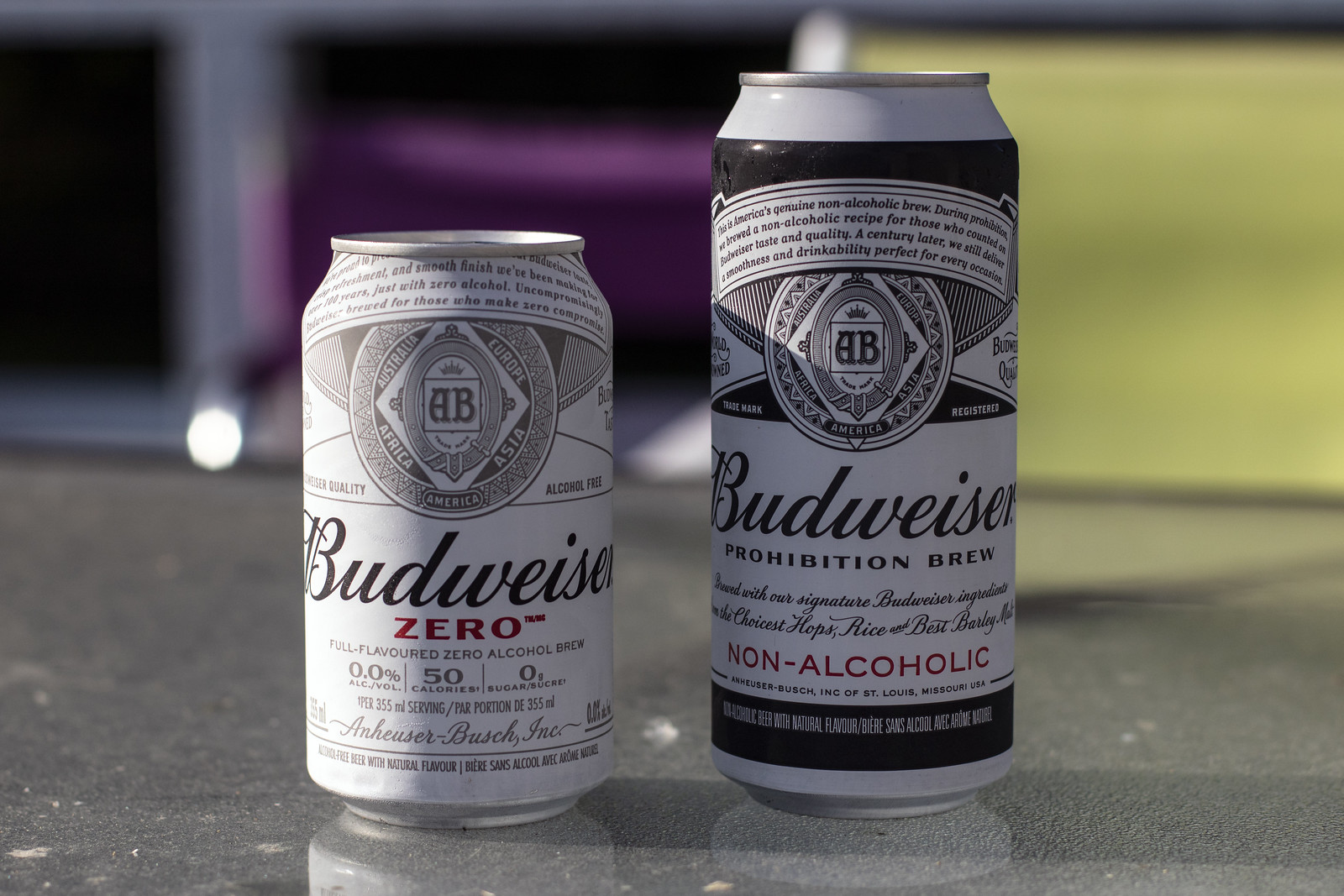 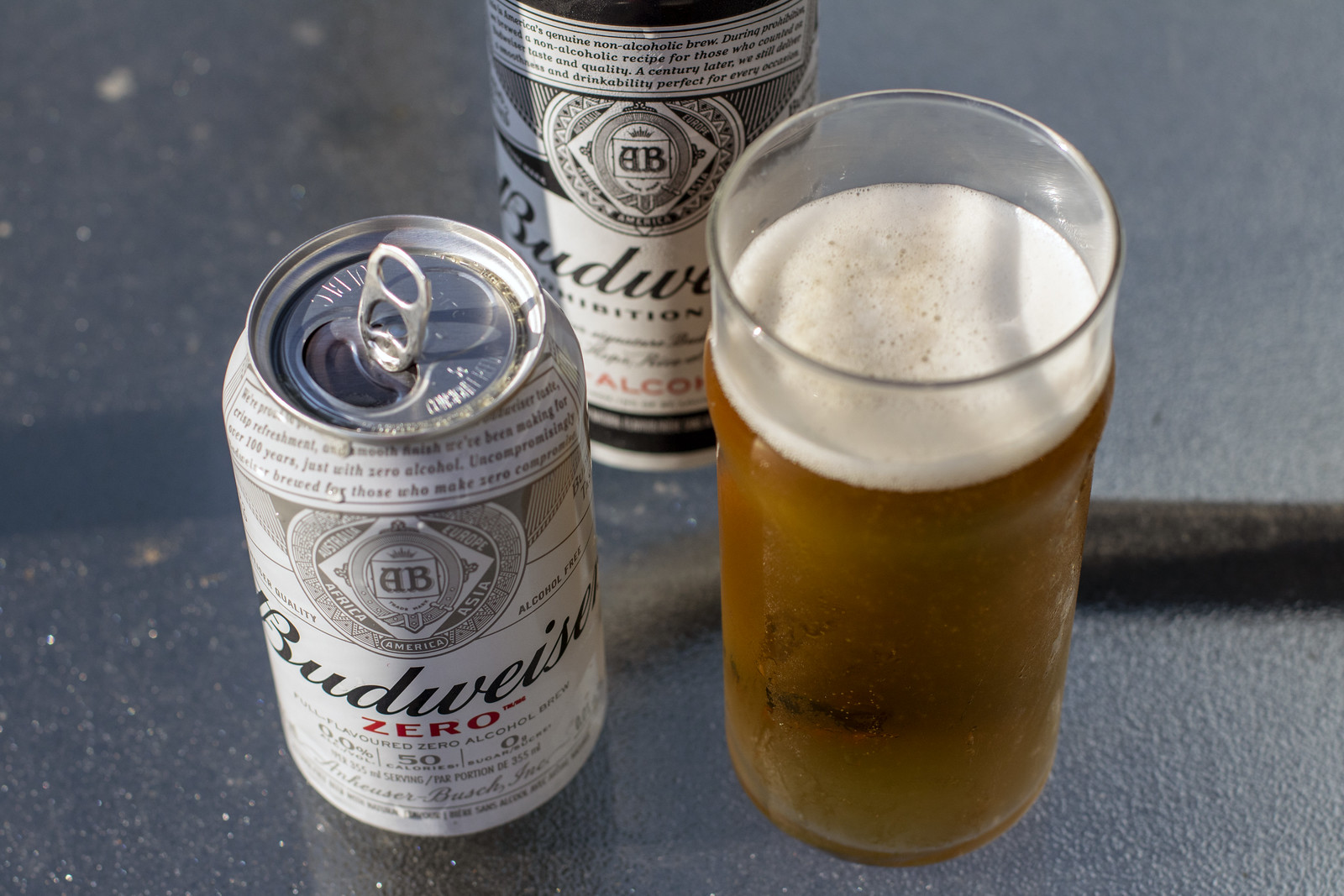 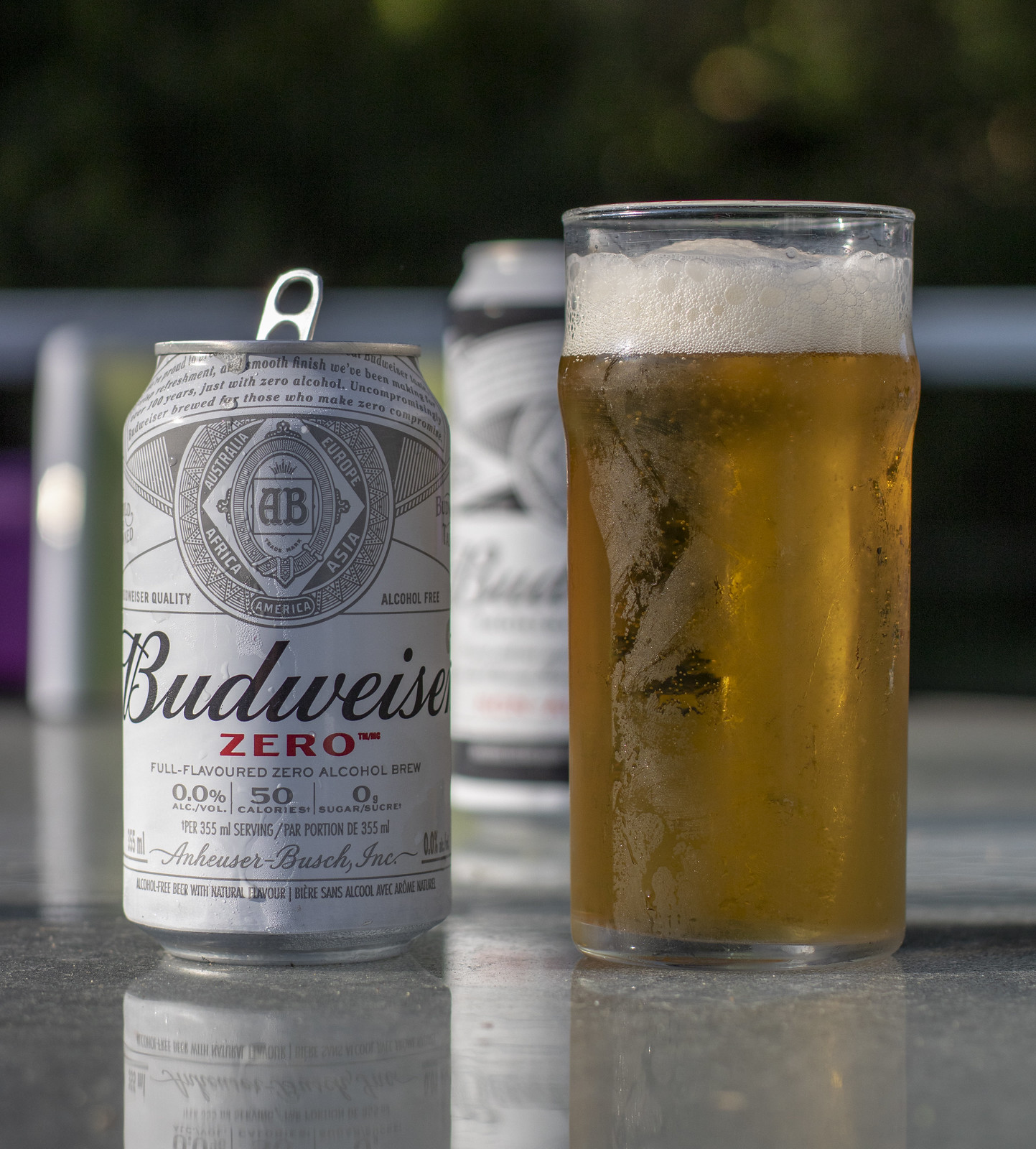 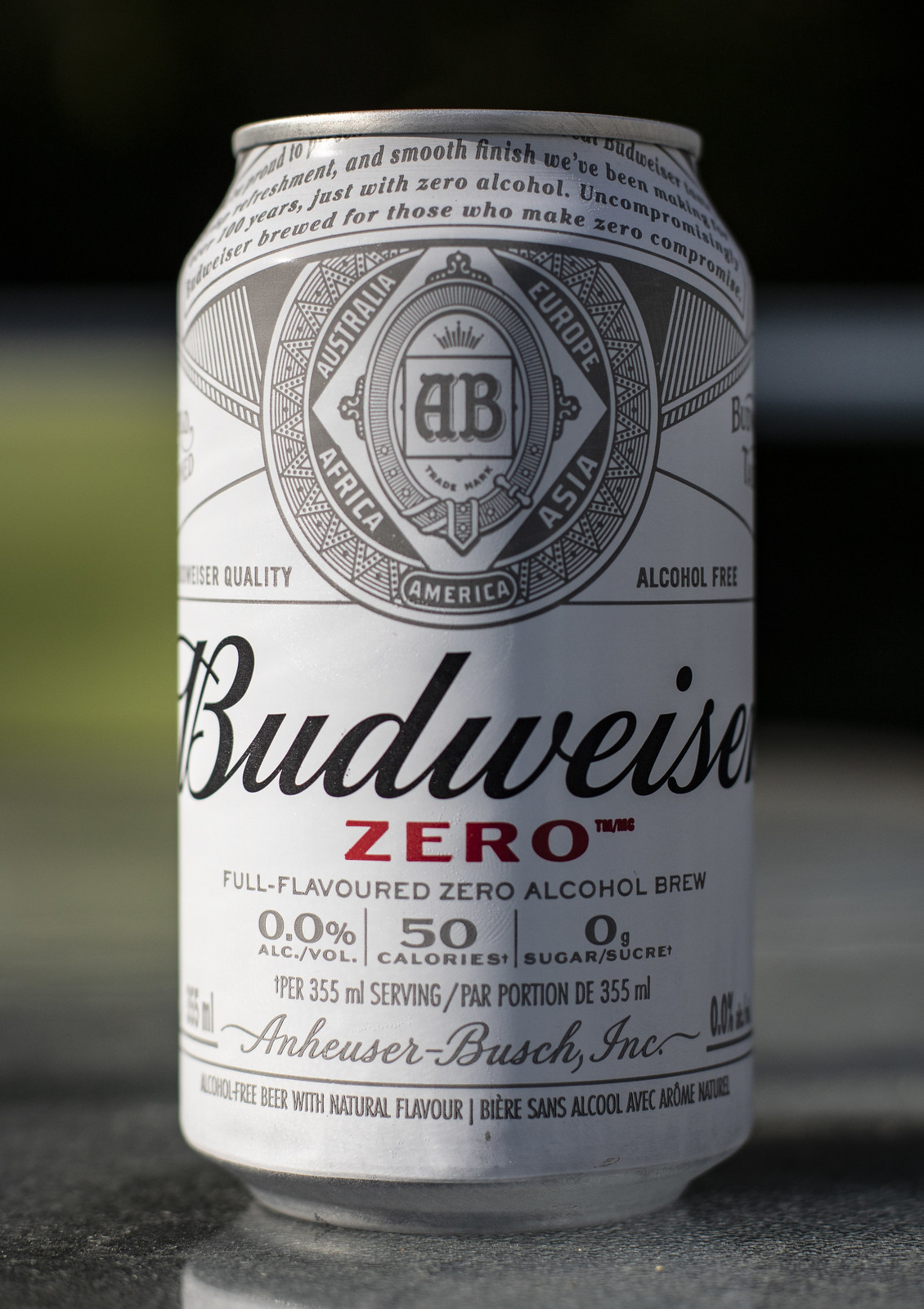