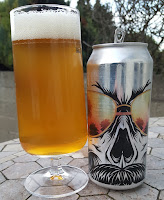 A new trilogy from the Third Barrel collective
today, all styles that have fallen out of favour in recent times,
for no good reason probably.

The first is an India Pale Lager under the Stone Barrel marque,
called Get Some. It seemed a little flat as it poured,
though maybe I had it chilled down a little too far. The aroma
offers a pleasant buzz of juicy mandarin and mango, from a liquid
that’s an almost perfect clear golden amber. It’s only 4.6% ABV and
that helps keep it easy drinking. Those fruity Loral hops, too, are
subtle and mannerly, not interfering with the work of the crisp,
clean and refreshing lager beneath. Summer is past, but I can enjoy
a sunny lager like this at any time of the year. 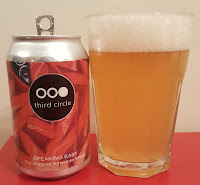 American wheat beer never really caught on here,
with the exception of Carlow’s Curim, still out there 22 years
after it was first brewed. Third Circle Speaking Easy is a
dry-hopped example of the style, though we are not given to know
with what. It looks like a witbier: yellow and hazy, though the
head isn’t up to much. There’s kind of a tropical fruit pulp funk
in the aroma: ripe pineapple in particular. I was expecting that to
unfold in the flavour, but it doesn’t really. There’s a soft wheaty
texture and a dry grain flavour but the hops are very muted. A
lemony bitterness, with a sprinkling of coconut, builds as it goes,
but it’s otherwise quite bland. There’s nothing wrong with this but
I don’t really get what it’s meant to be. 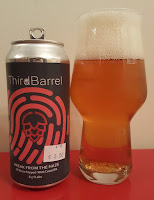 I was not anticipating any blandness from today’s
final beer, Break From the Haze: a west coast IPA of 8.5%
ABV in the Third Barrel range. It looks polished and perfect, an
enticing rose-gold colour and completely clear. There’s an
interesting balance here. The high gravity gives it a density and a
certain golden-syrup sweetness, and then there’s the scorchingly
dry and bitter west-coast effect, the hops rasping across the
palate and down the back of the throat, accompanied by a
stimulating peppery spice. It’s not as boldly flavoured as I was
expecting, but it’s good, making full use of that strength to
deliver something sippable and satisfying. Though not badged as a
double IPA it brings some of the chewy warmth that the good ones
have.

That’s a full week of blog posts, selecting more or less randomly
from what’s on offer, featuring not a single New England IPA. Could
the hazy reign of terror be finally coming to an end?