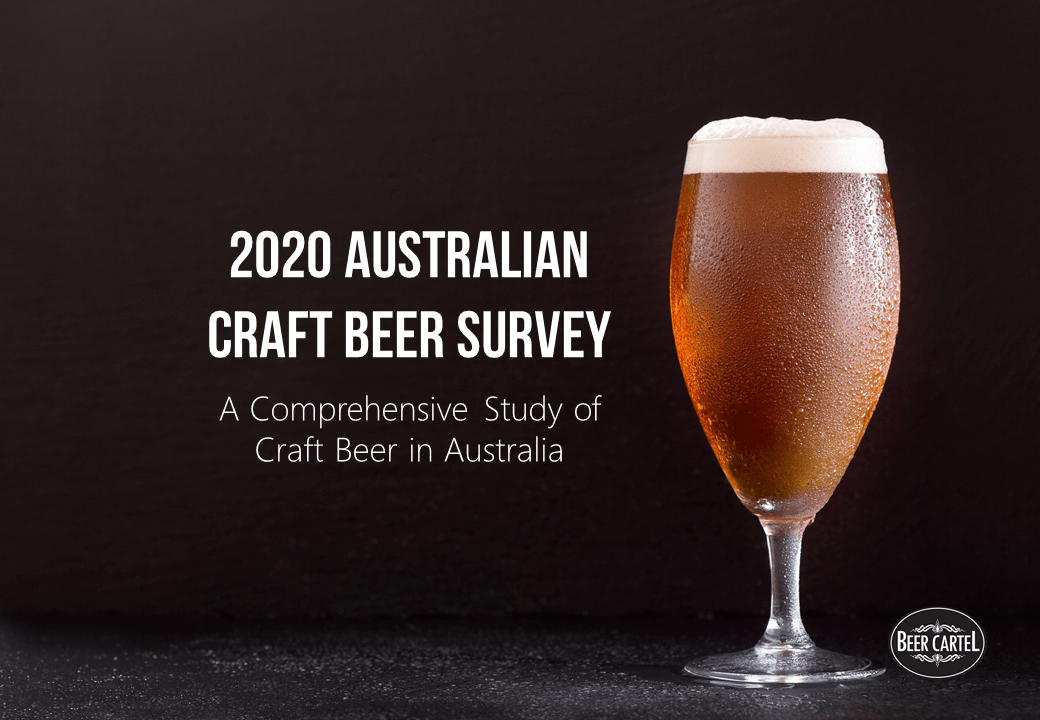 The 2020 Australian Craft Beer Survey by Beer Cartel is the
largest study of Australian craft beer drinking trends. It follows
on from the
2016,
2017,2018
and 2019
versions of the same study.

The survey itself was run between July-September 2020 and
contained a range of questions relating to what was called ‘Peak
COVID-19’ (April to May 2020) and ‘After Peak’ COVID-19 (anytime
after this). Over 200 different organisations helped to promote the
survey ensuring that the survey was an accurate cross section of
Australian craft beer drinkers.

The data that follows helps to provide a great picture of the
growing Australian craft beer market.

A prize of $500 of craft beer was offered as incentive to take
part in the research. To see if you were the lucky winner scroll to
the bottom.

Key findings from the research include:

2. COVID-19 has significantly increased online
purchasing. Prior to COVID-19 38% of drinkers had
purchased beer online in the last year. This has increased
significantly with 53% of all respondents having purchased beer
online since April this year.

4. Consumers have shown strong support for Australian
independent craft breweries through COVID-19. Drinkers
indicated since COVID-19 they were purchasing less Australian and
international mainstream beer while local and Australian craft beer
purchases increased. This coincides with increased awareness in the
Independent Seal (60% awareness) and 93% of respondents agreeing
that ‘Australian breweries need our support more than ever’.

5. COVID-19 appears to have impacted consumers very
differently. While for some their weekly spend on beer
during COVID-19 has dropped, for a proportion, particularly during
COVID-19 peak (April – May 2020), spend actually increased as
people began stocking up on beer at home similar to other
commodities.

Impact Of COVID-19 On Purchasing Behaviour

With the world at large being so dramatically affected this year
by Coronavirus (COVID-19), we thought it only appropriate to have a
big focus on this and the impact COVID-19 has had on the purchasing
behaviour of Australian craft beer drinkers.

Note: questions and wording was created prior to Melbourne going
into it’s second wave of lockdowns (July 9th).

Amid the peak of COVID-19 lockdowns in Australia during Apr-May
2020, there were three very different reactions to purchase
behaviour. Over a quarter (27%) said their weekly spend decreased,
while 40% indicated their weekly spend increased, with the
remaining 33% unchanged in their spend.

The net impact of these changes ( Total Increased less Total
Decreased) meant there was positive 13% increase in overall
spend.

During the peak lockdown period, similar to other commodities,
there was an increase in beer stocked at home. This  reflected a
concern for the potential dwindling of supply and the increased
spend on beer (previous chart above).

Note: Does not indicate consumption has increased (see ABA
industry report on Impact of COVID-19 on Industry).

After the peak of COVID-19 (post April-May 2020), there were
still changes in weekly spend with 25% increasing their spend and
21% decreasing this for a net change of a 4% increase.

Changes To Types Of Beer Purchased Since COVID-19 Began* 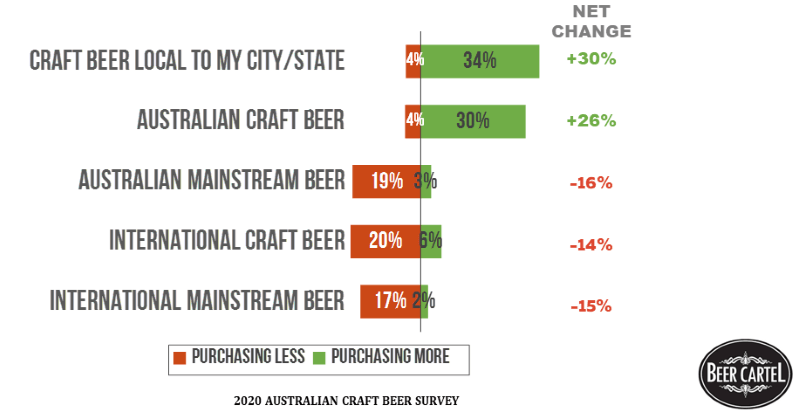 A number of craft beer drinkers appear to have changed their
beer purchasing behaviour during COVID-19, increasing purchases of
Australian craft beer in place of other beer types
(Australian/International mainstream and International craft
beer). 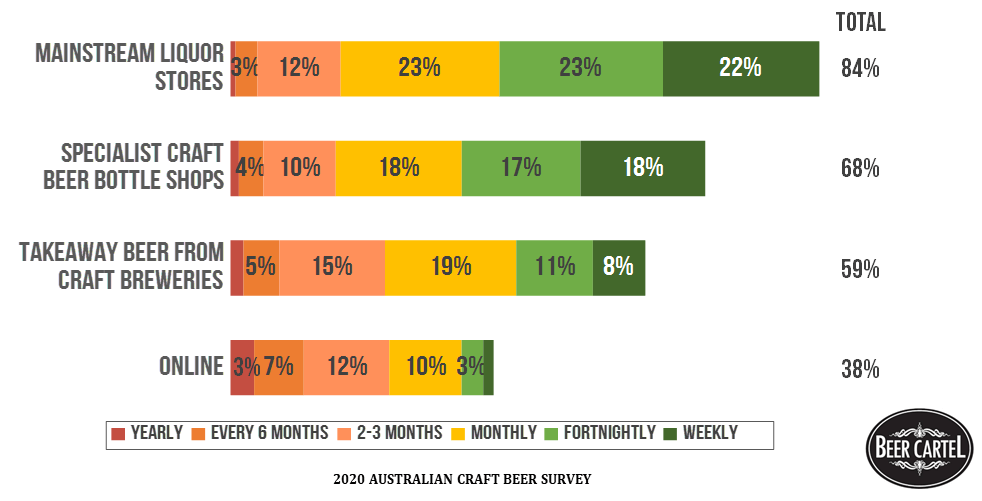 Prior to COVID-19 the majority of off-premise purchases were
made through mainstream liquor stores with 38% purchasing annually
or more often online. 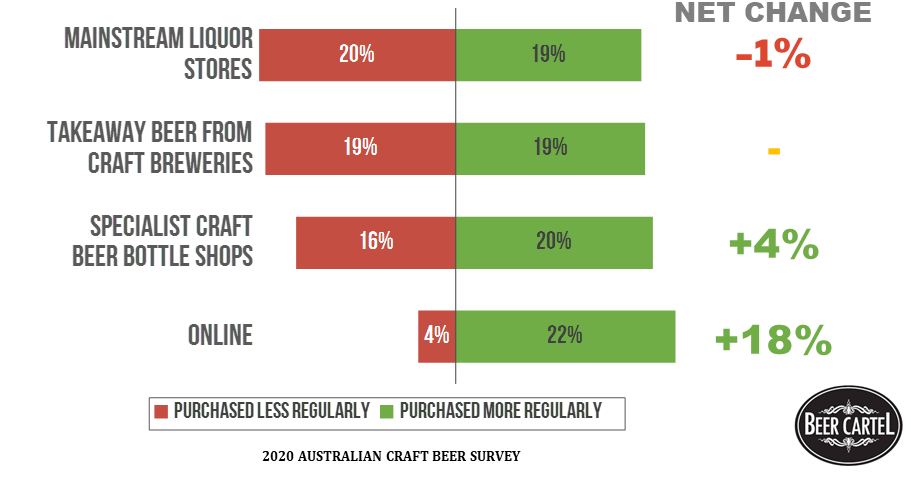 During peak COVID-19 there was a significant uptake of
purchasing beer online which is consistent with other retail
categories during the pandemic.

Despite a proportion of drinkers saying they were purchasing
from stores and craft breweries less regularly, overall changes
were relatively neutral with a similar proportion increasing the
regularity of their purchasing. 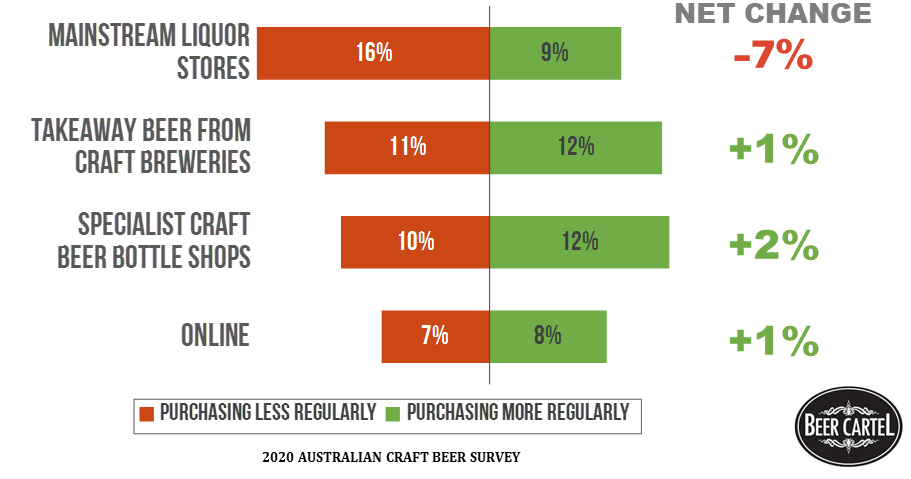 In a post-peak COVID-19 period (after Apr-May 20) purchasing
from mainstream stores has moved lower overall with other channels
increasing slightly. 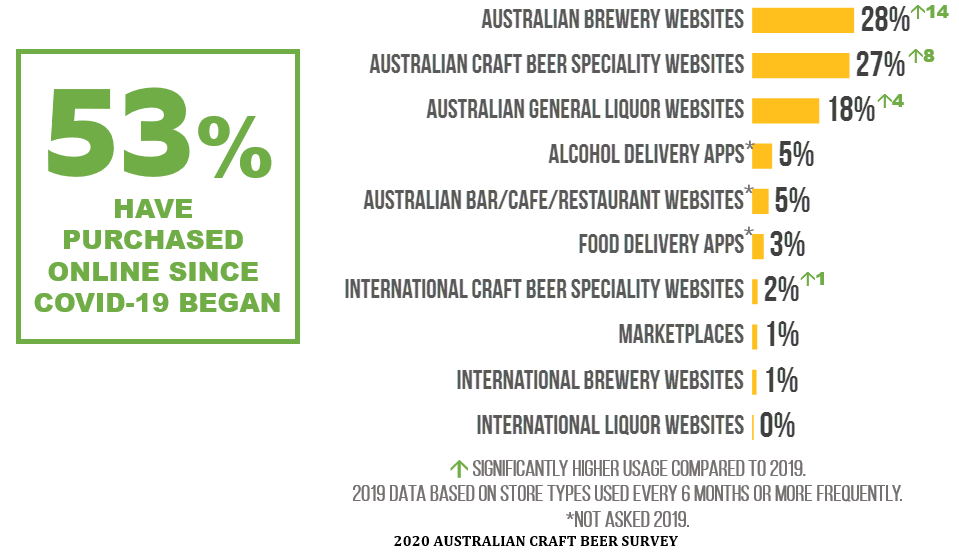 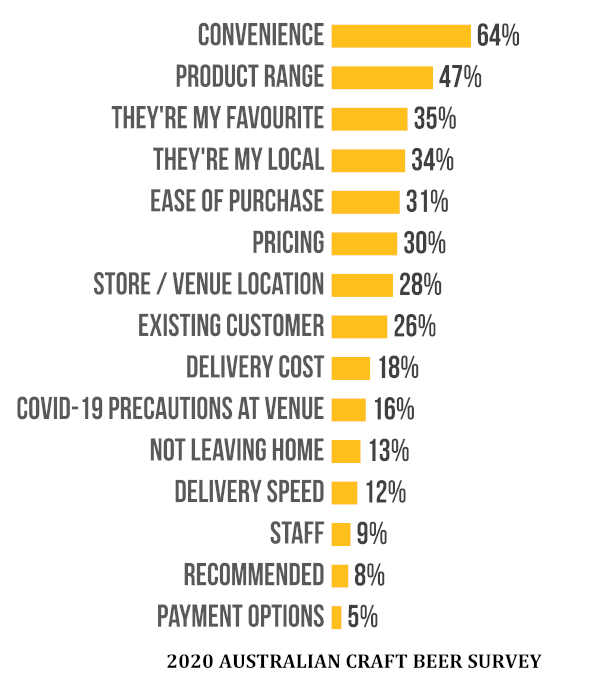 The main reasons for where people purchased craft beer during
the peak of COVID-19 were based largely around convenience (64%),
product range (47%), being their favourite (35%) and being local
(34%). 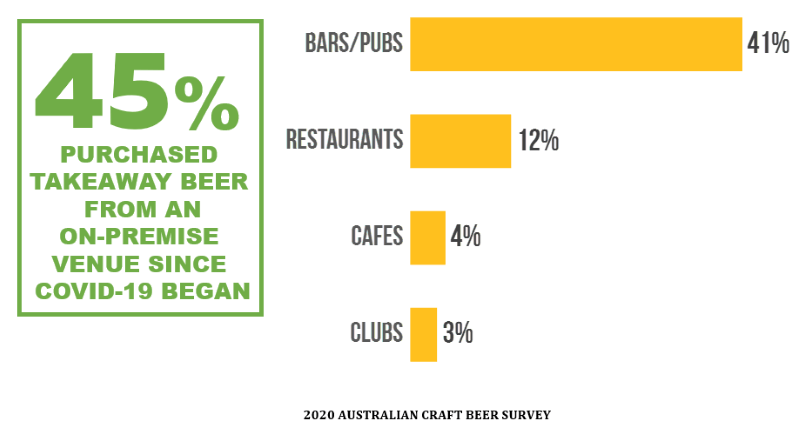 While online purchasing (previous chart above) increased
dramatically over the course of COVID-19 one other area that saw
high purchase behaviour was buying takeaway beer from on premise
venues. This was permitted in many states as a result of short term
changes to licensing. 45% of craft beer drinkers indicated they had
purchased takeaway beer from an on-premise venue, with this done
most widely from Bars/Pubs (41%).

Expected Date At Which Going Back To Bars 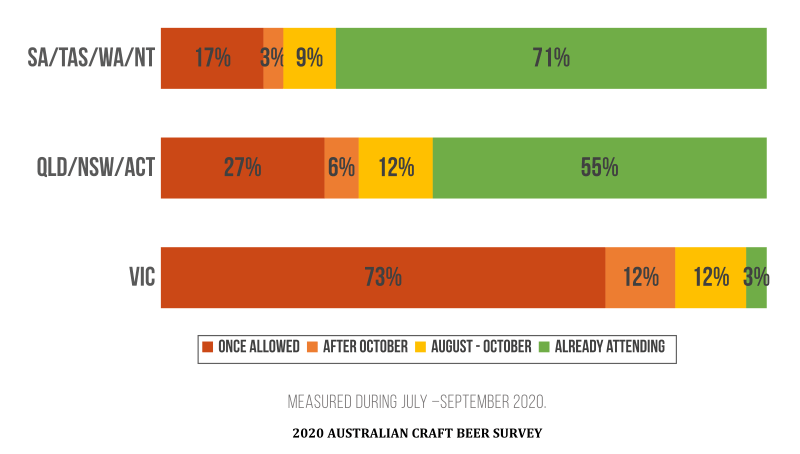 A large proportion in SA / TAS / WA / NT were already attending
bars at the time of the survey (Jul-Sep 20), with a small
proportion showing a reluctance to attend until a later date. For
Victoria, most expected they’ll start visiting bars as soon as
they’re allowed (at the time of survey Victoria was going through a
second lockdown).

Expected Date At Which Going Back To Breweries 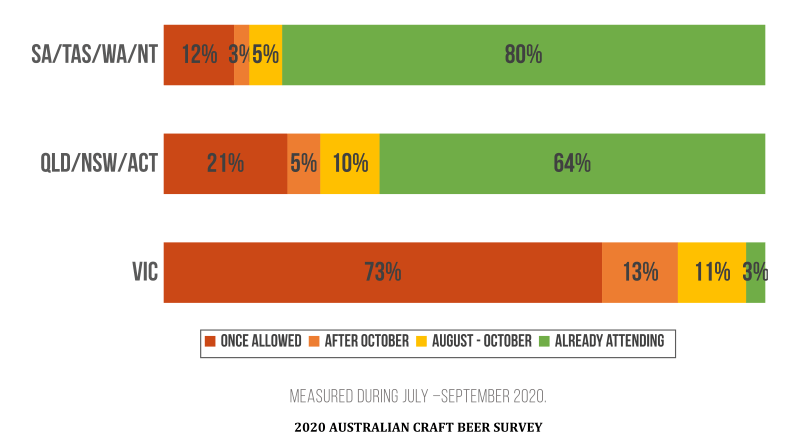 The expected date of returning to breweries is similar to bars;
more in SA / TAS / NT / WA are already attending, with a slightly
lower proportion in QLD / NSW / ACT and those in Victoria waiting
to be allowed.

Expected Date At Which Going Back To Beer Festivals 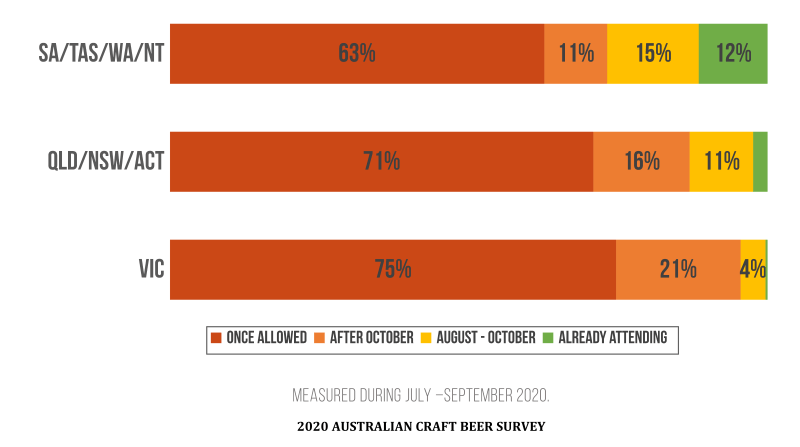 In most states drinkers are waiting to be allowed to once more
attend craft beer festivals.

A new area of focus for the 2020 survey was looking at
consumption of
alcohol free and gluten
reduced/gluten free beer. Both are trending beer niches driven
from a health/consumption perspective. 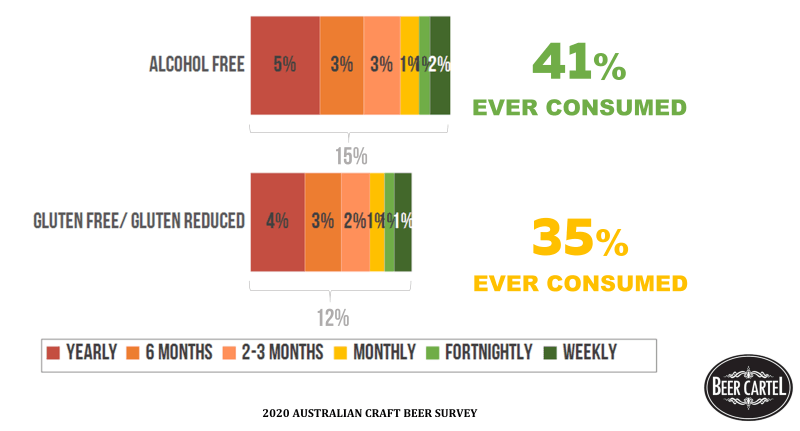 Over 41% have ever consumed Alcohol Free beer with 15% of these
having done so in the past 12 months and 2% weekly.

In comparison 35% have ever tried Gluten Free/Gluten Reduced
beer with 12% drinking these yearly or more often.

For the past three years a large focus of the survey has been on
the importance of independent ownership, with a strong preference
expressed by craft beer drinkers to purchase from Australian
independent breweries as opposed to those owned by a large
multi-national company. 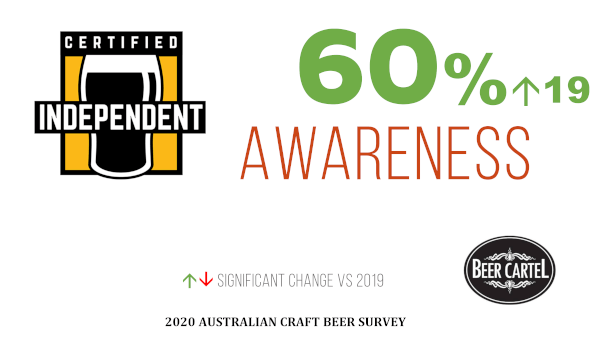 In May 2018 the Australian Independent Brewers Association (IBA)
released their Independent Seal to help consumers better identify
those breweries that are independent. 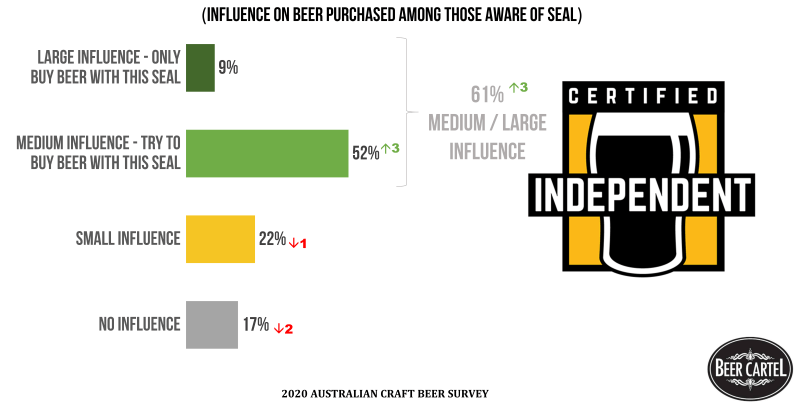 Among those aware of the seal 61% said it has had a medium to
large impact on their beer purchasing behaviour. This is a 3 point
increase from 2019 (58%).

What the Term ‘Independent Beer’ Means 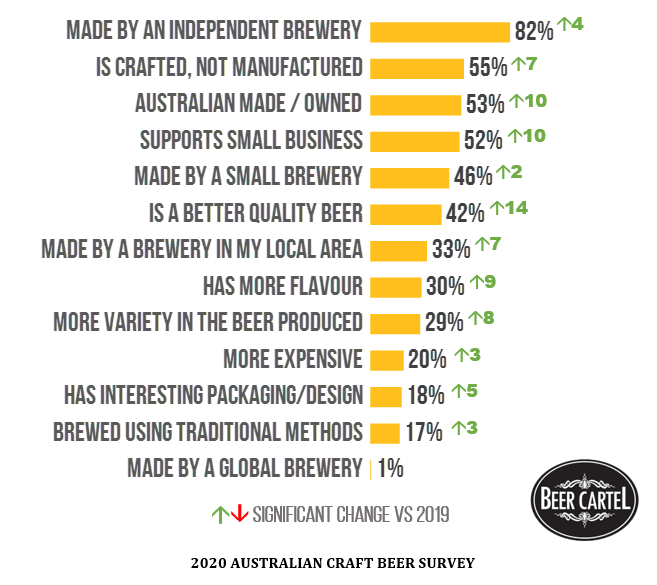 Across most descriptors regarding the term ‘Independent Beer’
there have been increases. While being ‘made by an Independent
brewery’ is most cited (82%), ‘Australian made/owned’ (53%),
‘supports small business’ (52%) and ‘is a better quality beer’
(42%) have seen the biggest gains in perception. 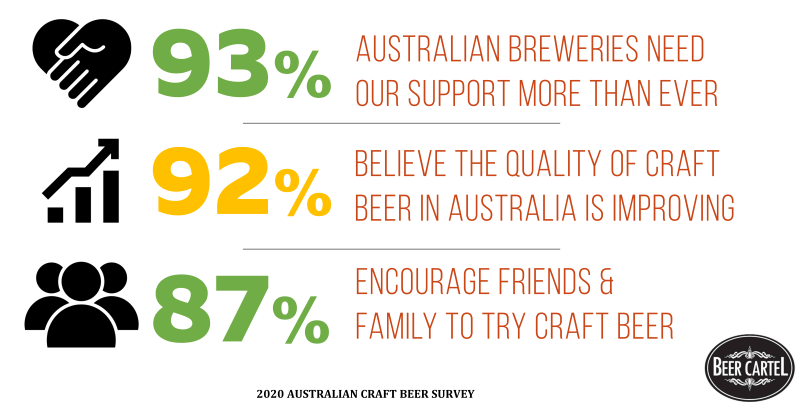 There is a strong perception that now more than ever, Australian
craft breweries need our help. 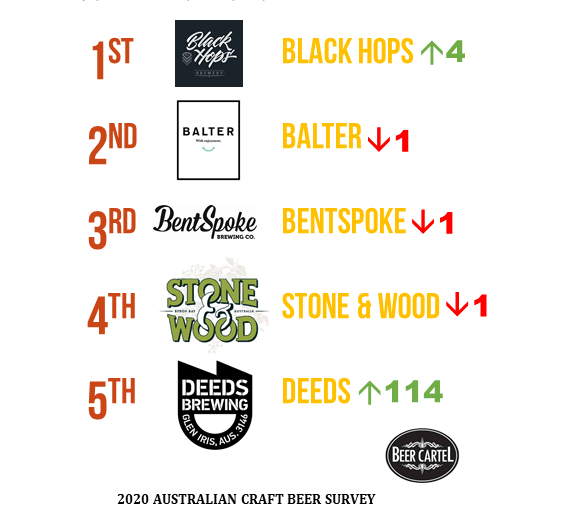 Congratulations goes to Black Hops who for the first time has
taken out the title of Australiaâ€™s Best Craft Brewery. Balter who
for the last two years has taken out the top spot has dropped to
second with Bentspoke and Stone & Wood each shifting down one
place. Deeds has been the big mover jumping up 114 spots in the
last year to 5th place. 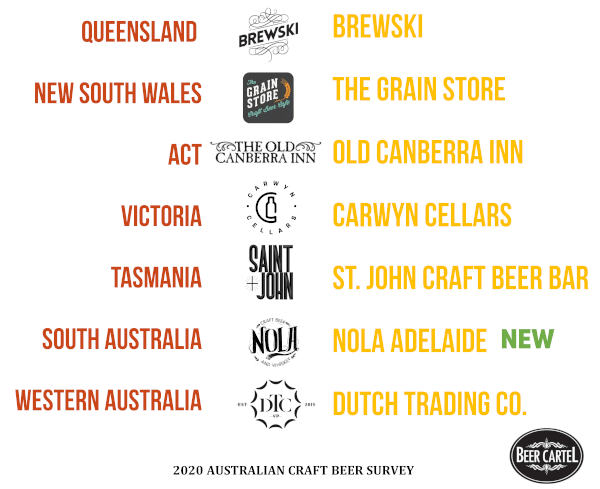 Amongst craft beer venues there has been no change in Best Craft
Beer Bar / Pub for all states except South Australia, where NOLA
Adelaide has moved to number one ahead of The Wheatsheaf Hotel.

The Grain Store in Newcastle and Saint John Craft Beer Bar in
Launceston are the only two venues which are located outside of the
capital city in their state. 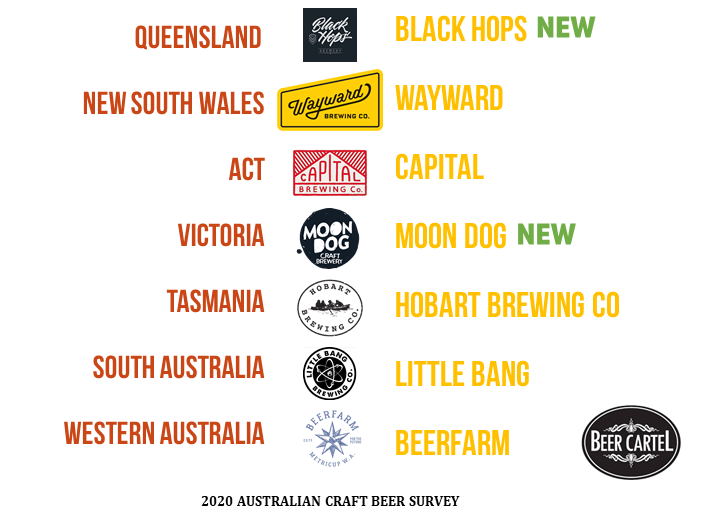 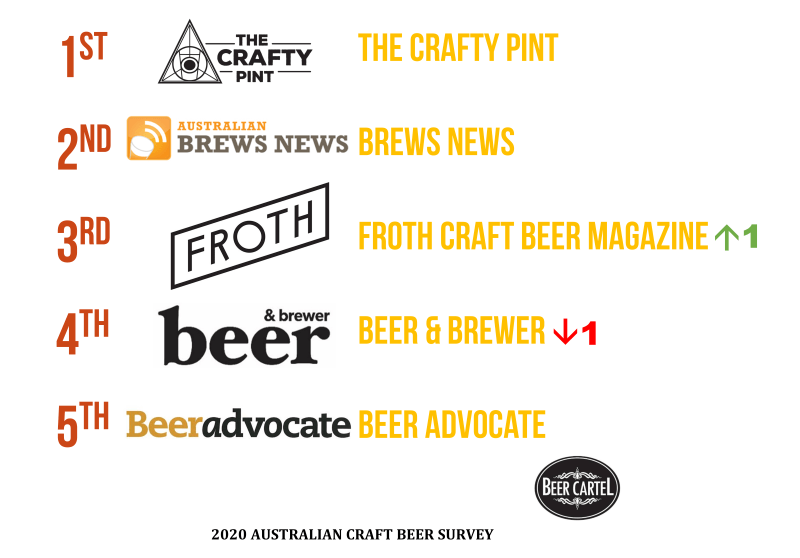 The Crafty Pint continues to be Australiaâ€™s most read craft
beer news site/blog, similar to every year since the survey began.
Australian Brews News is second with Froth Craft Beer Magazine
moving to 3rd spot. 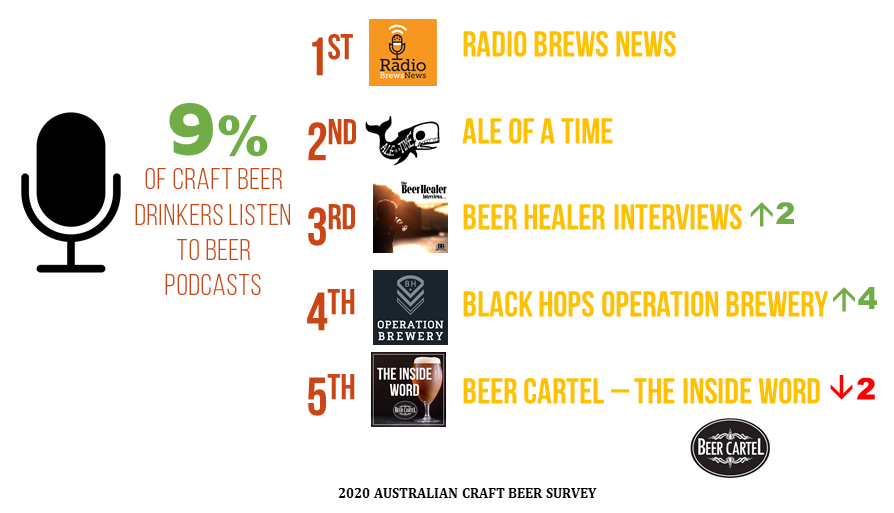 9% of craft beer drinkers listen to podcasts up from 6% in 2019.
Radio Brews News is the most listened to podcast followed by Ale of
a Time and Beer Healer Interviews. 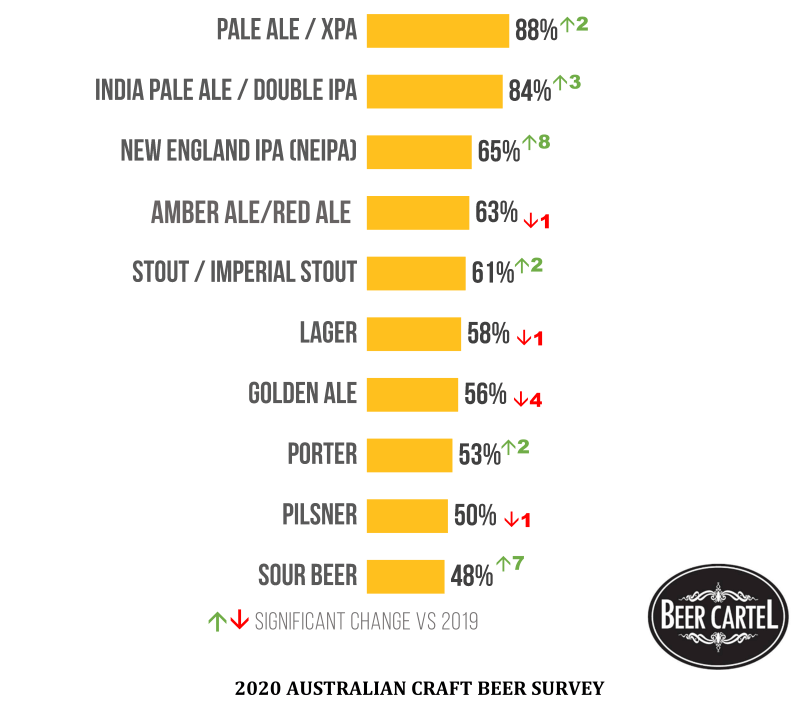 In 2020 New England IPAs (NEIPAs) and sour beers have been the
two styles that have seen the biggest gains in overall consumption,
growing by 8% and 7% respectively. 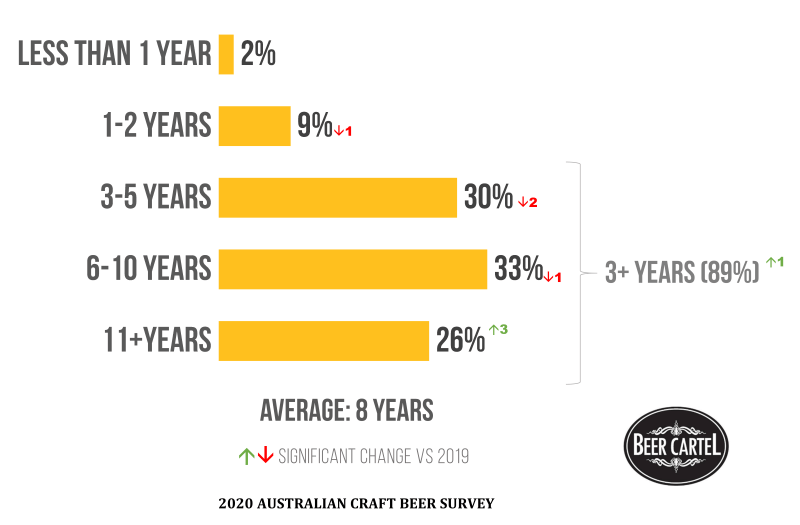 Similar to previous years, on average people have been drinking
craft beer for 8 years. 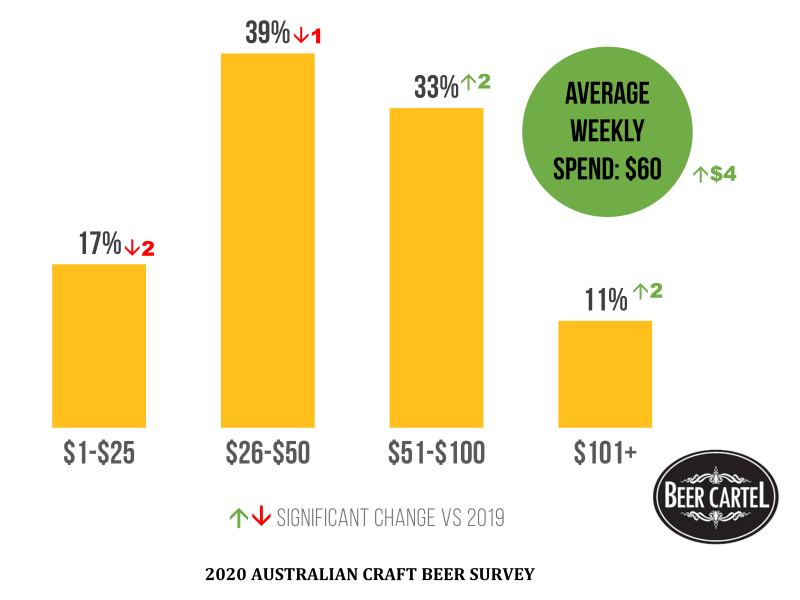 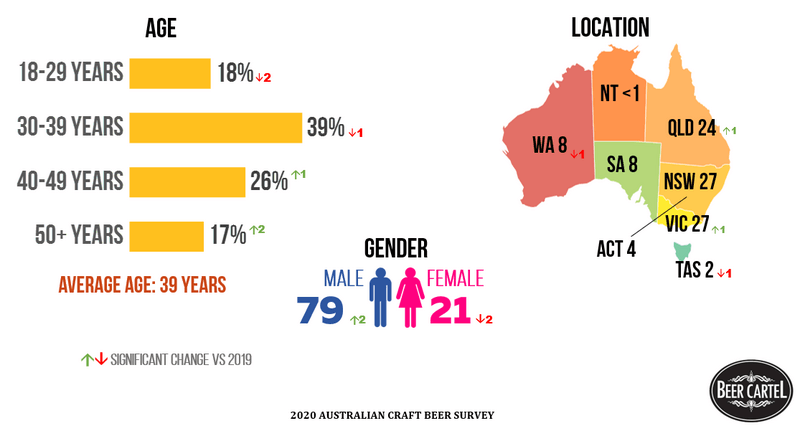 The craft beer drinker profile is relatively unchanged with
small changes to gender and age. 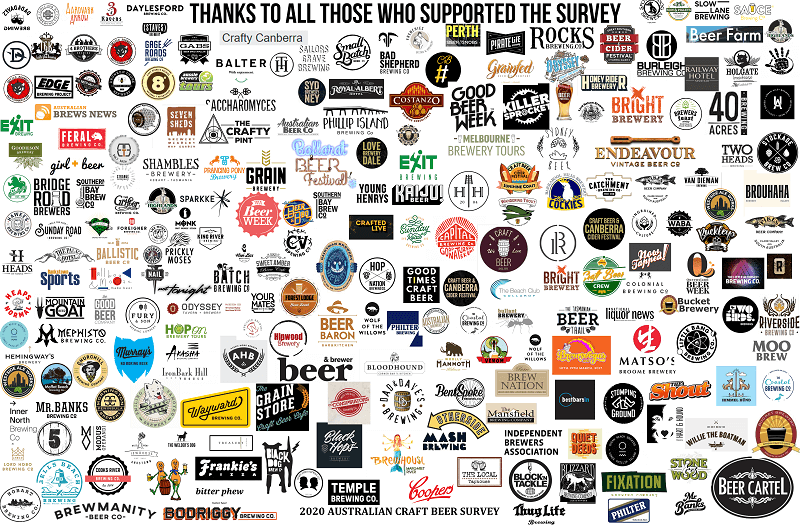 A special thanks goes out to all those who have helped support
the 2020 Australian Craft Beer Survey. Without your assistance none
of this would have been possible. We raise a glass to each and
every one of you, and thank you for being a part of this hugely
exciting industry!

Please feel free to share any of the information/charts
above. We simply ask that Beer Cartel is attributed, including a
link to www.beercartel.com.au when
sharing online. High resolution images and interviews are available
on request.

Beer Cartel is Australiaâ€™s leading craft beer bottle shop,
stocking over 1,000 craft beers from Australia and overseas.
Purchases can be made through the Beer Cartel website (www.beercartel.com.au) and its
Sydney store in Artarmon.

Congratulations to Laurence Judd winner of $500 to spend on
craft beer.