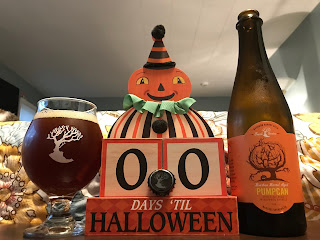 Around the time I was really started my craft beer journey,
MadTree released barrel-aged variants of its The Great PumpCAN.
Pumpkin beers and I didn’t really see eye to eye at that time and
the BA PumpCAN releases weren’t even on my radar. It wasn’t until I
visited MadTree a few months after the release that I saw a poster
for the beers and knew what I’d missed out on.

Now, let’s pivot to talk about whales. I promise, this loops
back around. A whale is a limited, rare, and highly sought-after
beer. I’ve been lucky enough to enjoy a whale or two in my life.
But, what’s more important to me are my personal whales. These are
beers that I’m after–still usually pretty rare–that might not
necessarily be on someone else’s whale list.

Beyond that, you have your white whales, your Moby Dicks, the
ones that get away and, no matter how close you think you are to
finally tracking them down, vanish. For five years that’s what
Bourbon Barrel Aged PumpCAN was to me (and it’s what the rum barrel
variant of it still is). Then, out of thin air, MadTree broke some
beers out of their cellar last fall, BBA Pumpcan among them. My
white whale had returned from the dead. A ghost, one that I managed
to trap, one that’s been haunting my cellar since.

Today, on All Hallow’s Eve, I’m tearing into this ghost whale.
Let’s see if it lives up to the hype I’ve built around it.

MadTree’s currently quartered in Cincinnati’s Oakley
neighborhood. However, when this beer was brewed, they were in
their original home of Kennedy Heights. While their location’s
changed over the years, the quality of their beer has not, nor has
their commitment to environmentalism and sustainability. Here’s
their “About”
page if you want the full story of who (and why) they are.

Unfortunately, since BBA PumpCAN’s so long out of production, it
doesn’t have a spot on MadTree’s website. I’d link you to a review
of the standard beer it’s based on, The Great PumpCAN, but I never
got around to writing about it while it was still in active (i.e.
being canned and sent into distribution) production.

This means that, for today, we’ll have to survive with what’s
printed on my bottle’s label. According to that, the ale’s just
PumpCAN that’s been aged in bourbon barrels. Both the original
beer, a delightful pumpkin ale with a 3.62/5
on Untappd, and this variant (found
here on Untappd, with no additional information than what I’ve
previously mentioned) clock in at 7.9% ABV. 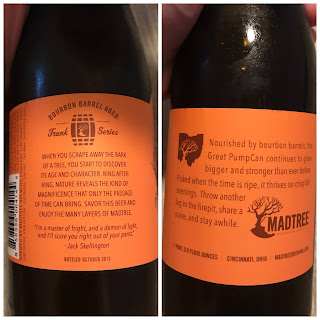 Before proceeding further, let’s address how I’m drinking
tonight’s beer. I’m breaking a cardinal rule of the blog, one where
I only drink beer out of a glass if it’s packaged in a bottle with
a cap that’s either sealed in wax or wrapped in foil. I figured,
though, that given my perceived importance of this beer, it
deserves the glass treatment, too. Which is why I’m drinking it
from a Belgian glass.

The bourbon barrels steal the show on the ale’s nose. All oak
and vanilla and bourbon booze. This is a tad different from other
BBA beers I’ve had–the oak smells weathered, old. Almost like a
dry wood quality. I have no idea where this is coming from but it
adds a definite something special to the bouquet. Beyond all that,
I’m picking up notes of pumpkin and pumpkin pie spice, although
these are almost an afterthought. This bouquet is something else,
and just as deep and different as I wanted it to be. I can’t get
enough of it. Purrl likes it, too–she gave my proffered glass
thirteen spooky whiffs. 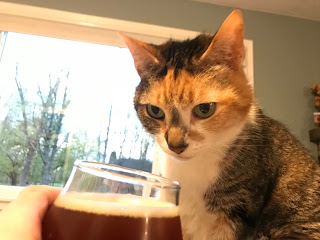 Let’s unpack BBA PumpCAN’s flavor profile: burnt caramel,
coffee, vanilla, toffee, pumpkin, and pumpkin pie are all flavors
I’d expected. There’s something else, though. Stout dark fruit.
Plum and fig, namely. These fruits are unexpected, like a clown
statue a babysitter desperately wants to put out of her sight, only
far less frightening and much more pleasantly surprising. There’s a
lot more depth to this beer than I would’ve thought but, given its
pedigree (it is a MadTree beer, after all), I should’ve been
prepared for it.

Despite the depth found elsewhere in the beer, BBA PumpCAN
drinks like an ale. The carbonation’s holding strong after five
years.

Because of how well the carbonation’s held up, the ale has a
good bit of head retention, a creamy color that’s a finger deep
with intricately laced bubbles. The color of the beer itself is,
fittingly for that bouquet, damn near the color of distressed
oak.

When Michelle and I were house hunting a few years ago, we asked
our agent to take us to an old house way out in the country. It
looked quirky enough from the pictures of it we’d seen online.
There was a taijitu in the middle of the living room floor (I
thought maybe it’d once been a karate studio). He agreed to show it
to us.

Turns out that the pictures online didn’t do the house justice.
It was dilapidated. The yard was grossly overgrown. A musty stench
lingered in the air.

We somehow found our way into the place’s basement. The only
window in it had, at one point, been entirely boarded up. Before
we’d arrived, someone had pulled a board off, entered the basement,
and spray painted “SATON (sic) GET OUT IN JESUS NAME” on one of the
walls. The basement creeped us out. There was a little walled-off
corner that was darkened and it felt like someone, or something,
was waiting in the shadows, watching us.

Needless to say, we did not put an offer in on that
house. I don’t know if anyone did. That house’s creep factor is
what tonight’s beer is reminding me of, as I sit sipping it in my
darkened, candle-lit living room and listening to Pumpkinlord’s
Tricks
‘N’ Treats – Demo.

MadTree Brewing’s Bourbon Barrel Aged PumpCAN lives up to my
incredible expectations for it. It has all the depth and nuance
I’ve come to expect from the brewery, and puts an extra spook into
one of their most hauntingly legendary legacy beers. 10/10. While
it’s scary that I’m almost done with the bottle, it’s even scarier
that I have another stashed away for later. And, if I’m ever lucky
enough to find the rum-barrel aged variant, well, that’d be
downright terrifying.